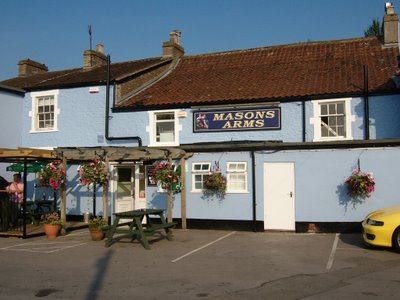 The Masons has been our local ever since we moved here, even though it's five miles from home. Three months ago it had a serious fire, and it's just reopened.

Whether it was memories of the fire or just good business sense, the owners have decided to make it smoking free!

It always was a great pub but now it's a hundred times better. The only smell now is fresh paint, no having to watch uncool losers puffing away on their idiot sticks, or having to fight for breath when the hay fever (me) and asthma (Wulf) are bad.

In April 2007 ALL pubs in England and Wales will enter the 21st century, and not a day too soon. I can't wait!

Tonight I went into the extraordinary Bath Arms, which is just over the village green from me. The first thing that hit me was two idiots SMOKING in the bar. I won't return to the Bath Arms until they ban smoking, either in April 2007 or much sooner if business sense prevails.

In a few years we'll gaze in wonder at old films where people were actually allowed to smoke in public!

Posted by Steve Sainsbury at 12:17 am