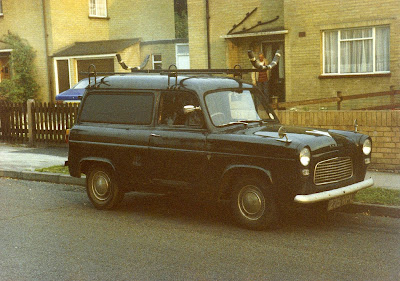 I've had some fun ribbing some socialists, but what total idiots they are! Hardly suitable foes at all.

I visited, quite properly, a Facebook group that was for haters of the Daily Mail. As a 100% hater of this comic for the learning difficulties community I had every right to visit it, as do we all. But almost straight away this group seemed to be a dark lair for those dinosaurs of the 50s and 60s, the LEFTIES! What a joke.

So I mischeviously started a thread 'The right hate the Daily Mail too' and didn't I get some serious gip from the twats!

Anyway, the technique went like this. Make a bold and bald statement along the lines of 'I'm right wing' then write paragraphs basically stating the opposite and see if anyone twigs. Not one. The kneejerk reaction was to take on board the first bit then ignore the rest. No wonder these middle-class losers were so easy to control in the sixties!

There were still idiots on there talking about 'nationalising all the large industries'. Pathetic.

So I finished on a bit of Transition and you know what? These Marxist-Leninist fools put a block on me, making sure I couldn't answer or challenge their statements. Pathetic. I think that makes it 15-love to Transition!

Posted by Steve Sainsbury at 5:49 pm No comments: 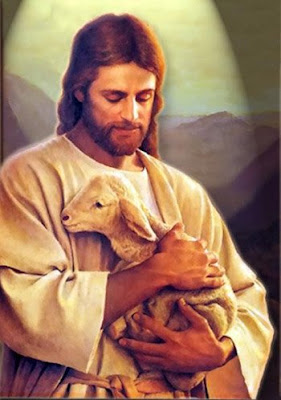 
The government is planning to close a legal loophole which allows staff at a private Christian academy to smack their pupils.

The Tyndale Academy in east London avoids the ban on corporal punishment in schools by falling outside the legal definition of a private school.

Ministers want to change the law to bring this academy into line.

But Tyndale's founder and principal tutor, Ferris Lindsay, says the government is over-reacting.

Corporal punishment was abolished in all British schools a decade ago. But that ban, and other regulations, only apply to private schools offering a full-time education.

Mr Lindsay says he set up the academy in 1999 to provide part time tuition - just over 16 hours a week - in order to avoid the ban on corporal punishment.

The Christian academy has only eight pupils, but ministers want to use the Education and Skills Bill, currently going through Parliament, to make sure part-time institutions which are the main provider of a child's education also count as schools and have to follow the same rules as other independent schools.

Ministers are concerned that if this academy can legally avoid regulation there may be others in the future who will follow suit.
There is also the possibility that others are operating without the knowledge of the authorities they say.

On its website, the academy, which is based in the Hope Baptist Chapel in Forest Gate, is described as basing its teaching and training on the Bible. It says it welcomes boys and girls from all religious backgrounds.

Mr Lindsay argues that the parents of children at the academy fully support the use of corporal punishment.

He says the policy involves teachers using their hands to smack children on the hand, if they persistently misbehave.

Pupils aged four to seven can receive a single smack; those aged between eight and 11 can be struck a maximum of three times in one go.

According to Mr Lindsay, corporal punishment was used on 12 occasions during the past school year.

Each time parents were informed after the event .

Mr Lindsay described the policy to BBC News as a small part of what goes on at the academy, but said is was so essential to its ethos that if the government did force him to stop using corporal punishment he would close the school.

He alleges ministers are misusing departmental power and resources by pursuing the academy.

Well, what can you say? I know christians are weird, but for a grown adult to set up a 'school' in such a way so he can physically assault the children?? Why isn't he up on charges of assault? Surely by any definition he's a paedophile?

The sooner this place is closed down and the teachers jailed the better. And if the kids' parents were aware of this going on - and approved of it - then the children should be taken into care and placed in decent Pagan homes.

christians think they have the right to impose their ridiculous 'beliefs' on the rest of us. The world will be a far far better place without them and their other monotheistic cousins who seem to thrive on bullying, violence, ignorance and terrorism. There's no place for them in this world.

Posted by Steve Sainsbury at 11:22 am No comments: 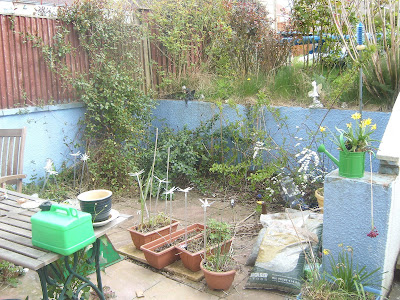 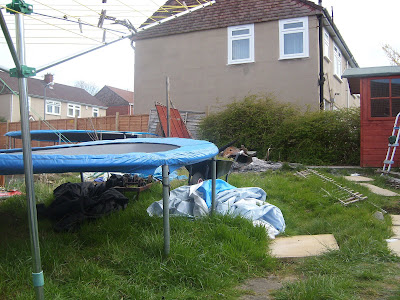 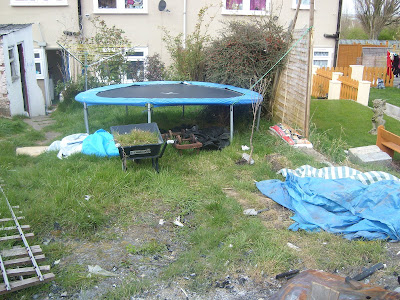 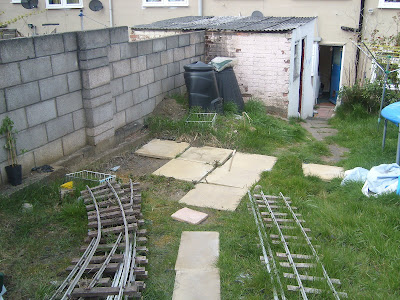 It doesn't look great does it? This is our 2008 project - to convert the garden into a permaculture haven. Some elements are already there - the compost bins, a few bushes and trees, the railway track. But there's loads more to do, and that trampoline's going to be a real pain! I'll update this as concrete progress is made ...

Posted by Steve Sainsbury at 1:27 am No comments:

do not speak to us of the Crunch 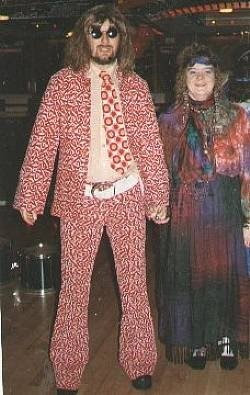 Debs had an alarming email today from an old friend in which he rolled out the tired old myths about Peak Oil - that there's loads of oil left (yes, we know that!), that there has just been a new oil find off Brazil (yes, we know that too), that there's more oil under the poles than in Saudi Arabia (certainly true now LOL!) and that we will seamlessly become a 'hydrogen economy' within a few decades.

Oh dear. Hippies are still out there, blithely burying their heads and hair in the sand. They still think that it will be business as usual, no matter what we throw at the world or what we take out of it. They still feel that Peak Oil is a threat to their 4x4s. Idiots. That will be the very least of their worries!

Peak Oil is NOT about oil running out - it's about oil becoming so scarce that it will no longer be available to us, that the price mechanism will gradually price us ALL out of the market. A year ago a barrel of oil was around $50, now it is $115, and it's unlikely to ever go down to double figures again, no matter how deep we bury our heads. Demand is still increasing, even though supply has been static for a while - almost definitely because we are now at the Peak Oil plateau. Oil will NEVER be as easy to find again as it has been over the last 100 years.

There is still as much oil left in the ground as we've extracted, possibly even a little more. But what we have extracted was the easy half. It is now a major task to get anything out of new fields (when we can find any), they are buried deep under the sea or in the world's most inhospitable places. That doesn't suggest that future oil will be cheap!

The new oil find off Brazil is great news for Brazil, although that should be tempered by the fact that it is going to be HUGELY expensive to extract, which again will keep the oil price high. In reality it's a marginal find. Yes, it could be as much as 30 billion barrels which sounds a lot, but assuming an extraction rate of about 30% (which is fairly high, the rest will be lost forever) that will last - at current consumption rates - just 125 days. Big deal! Even if every barrel at the top of the estimation range was extracted it would only last a year. One year. Think about it.

The oil under the poles is similarly expensive to extract, but I think only an idiot would seriously try to get it out. Pouring out yet more carbon in the future will almost certainly trigger climate change on a MASSIVE - and probably unsurvivable - scale. It can't be touched, even when oil reaches $1000 a barrel (probably around 2020).

Hydrogen is a bigger joke than biofuels. It is an energy CARRIER, not energy. It can only be produced from current resources and would require HUGE infrastructure changes even to bring it to the richest countries in the world. The generating capacity will never be there to make it anything other than a rich person's toy.

That's the reality. There's no head-burying, or indignation that the government will allow this to happen, no sadness as the imminent end of what's been a great lifestyle in many ways, no regret that millions, probably billions, will die prematurely as the oil age comes to an end.

We have to get on with the job, rebuilding our communities from the ground up, preparing for the end of oil and much that's become familiar to us.

I don't care if the hippies don't want to believe it. That's their problem. They will of course come round, just as they did with Climate Change, but it will probably be too late for them. I don't care. It's clear from their lack or vision or realism that they will hardly be useful in a post-oil world anyway. They aren't just burying their heads in the sand, but slowly digging their own graves.

Meanwhile the decent folk will continue to organise and plan for the post-oil world, making clever moves now to secure their futures as carefully as they can. A future that will be built on the graves of millions of dead hippies, if that's the way they want it.

And if you've been following the advice in this blog you won't be either ...

Posted by Steve Sainsbury at 11:08 am No comments: 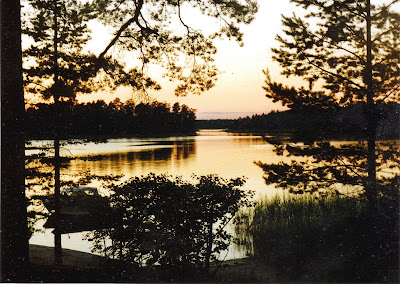 Almost two-thirds of people would be more likely to vote for a candidate in the upcoming local elections who had policies to tackle climate change, a survey showed.

A poll for the Local Government Association (LGA) found 62% of people would be swayed by candidates prepared to address global warming.

Wow!! That really takes the biscuit ... 15% of the UK population are hippies!!

Posted by Steve Sainsbury at 11:01 am No comments: 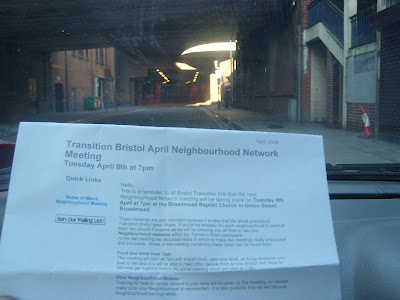 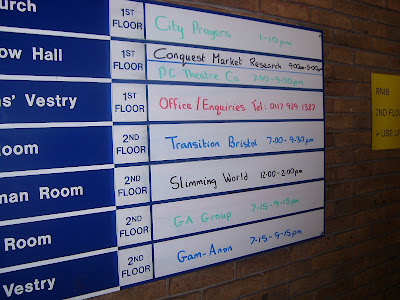 We went to our first Transition meeting last night, in Bristol.

Transition have really got a handle on the challenges of Climate Change and Peak Oil, proposing positive solutions and using a ground up approach.

If you're not yet involved then now's a great time to start, either by joining your own local Transition group, or starting the process of setting one up. 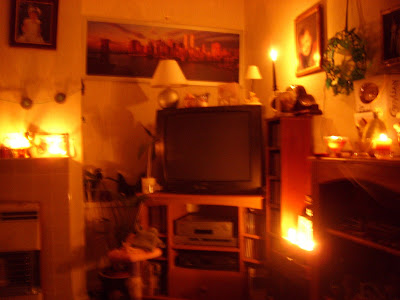 So did you manage Earth Hour on Sunday?

We had a great time, switching everything off at 8 and then watching the evening develop (some may say degenerate!) into a family sing-song, the sort of thing I haven't done for several lifetimes! I have a video but not sure anyone here would appreciate it going on, but keep looking ...

The biggest point of the evening is that once cast adrift from all the crap we're surrounded by - TV, rubbish consumer goods, the Pussycat Dolls etc - we're perfectly capable of doing stuff, and really fun stuff at that.

And before you tell me 'that's okay for an hour but how about for a week' I did two years in Scotland without electricity back in the early 90s, and it was great. In fact it's even easier over the long term because you learn new ways of coping.

Can't wait for Earth Hour 2009 - and next time let's all of us get our local councils to turn off the street lights. Fuckers didn't do it round here - too many lefties on the council!

Posted by Steve Sainsbury at 11:25 pm No comments: