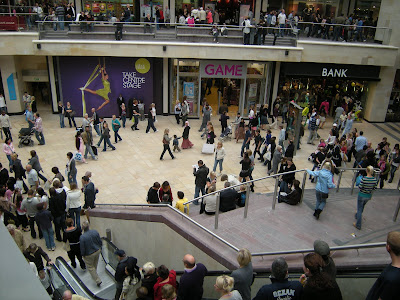 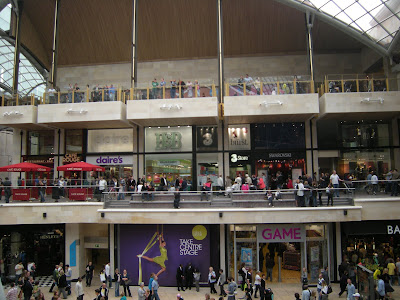 Where to next - everything looks the same! 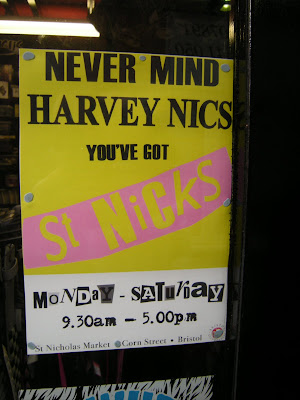 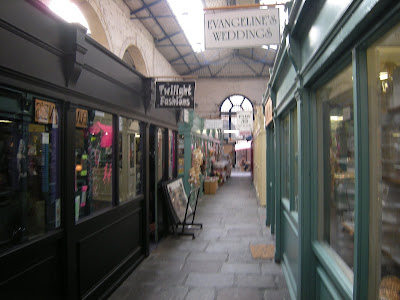 We visited the new Cabot Circus in Bristol today. On the way we saw zombies, spat venom at time travellers from the SWP, signed an animal rights petition and missed the christians. The place itself was an infuriating tangle of different floors, totally unimaginative shops and some nice (but far too busy) restaurants. All in all a white elephant with a sense of timing that staggers. It may well be the UK's last major retail development and will probably be all but empty once peak oil hits.

Posted by Steve Sainsbury at 7:38 pm No comments:

the US slides towards communism 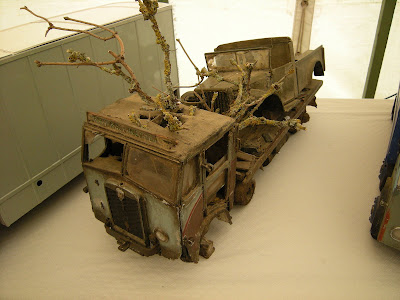 This evening commie Bush will speak to the nation (thankfully not ours!) Our previous business model, based on consumerism fuelled by huge amounts of cheap debt, is coming to its natural end. But our left wing friends across the Atlantic want to keep the party going.

Americans have NO concept of a free market. Their mortgages are backed by NATIONALIZED companies, they bail out businesses that should be left to go to the wall by throwing rapidly devaluing dollars at them and they expect the poor US taxpayer to fund this socialist drivel. It's pathetic.

Big government is ALWAYS wrong. It always ends in socialism then decay. In the UK Thatcher learned that the hard way, now Brown is finding it out too.

LEAVE THE MARKET ALONE AND IT WILL SORT EVERYTHING OUT!! But then, of course, the politicians will all be out of a job.

Posted by Steve Sainsbury at 12:18 am No comments: 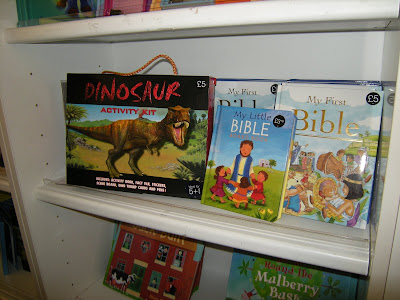 We set the dinosaurs on the foreign christian invaders on a shelf in Marks and Spencers. 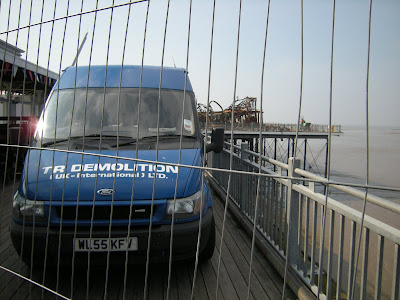 Took the obligatory tourist trip to the burnt out pier. 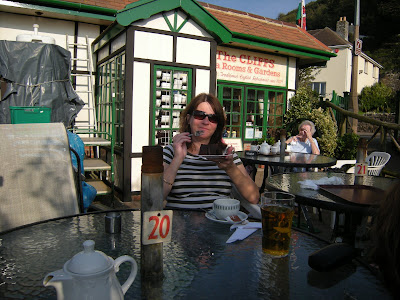 Stopped at The Cliffs tea room on the old toll road - a wonderful slice of 1930s Englishness. 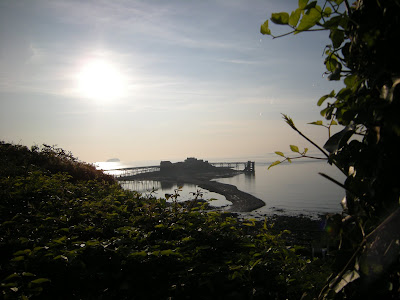 We popped down to Wick St Lawrence to visit our aristocratic Finnish chums on Saturday and ended up visiting Weston. Not, alas, on the long-closed Weston Clevedon and Portishead Railway which once had a station at Wick St Lawrence, but in our new low carbon car/van thing.

Posted by Steve Sainsbury at 12:08 am No comments: 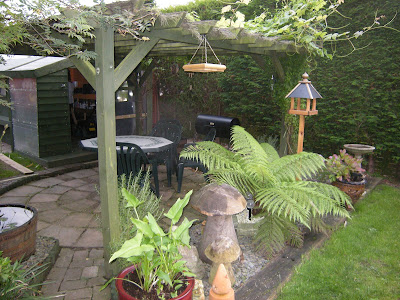 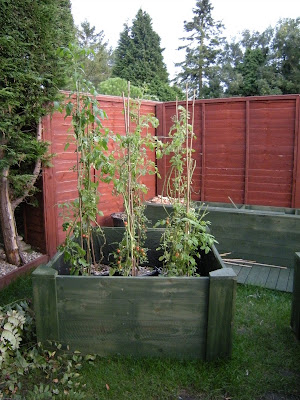 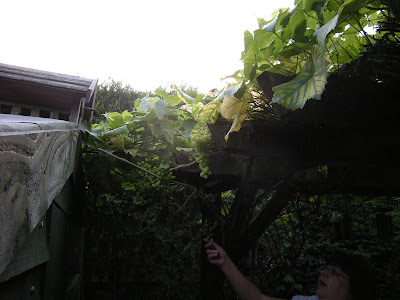 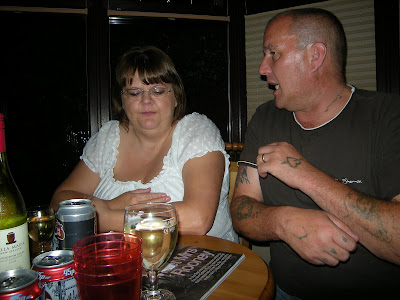 On the second day we visited Chris and Neil up in Findon. We hardly need push Peak Oil any more - everyone gets it now. Neil is really looking forward to things breaking down as he's the kind of bloke that will thrive in a much harsher world! He's got a dog the size of a bear, knows the location of more community guns than I do, composts, beats up hippies and commies and grows his own food. He was also desperate to talk up Peak Oil.

Posted by Steve Sainsbury at 12:00 am No comments: 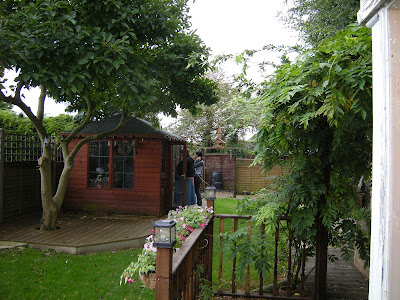 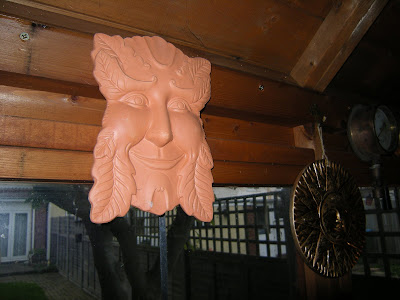 The ubiquitous Green Man - no English home should be without at least one! 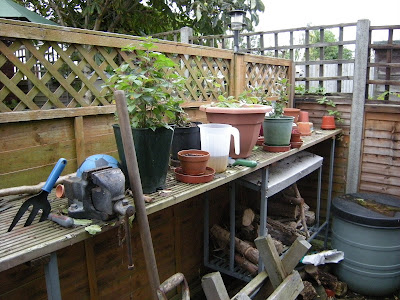 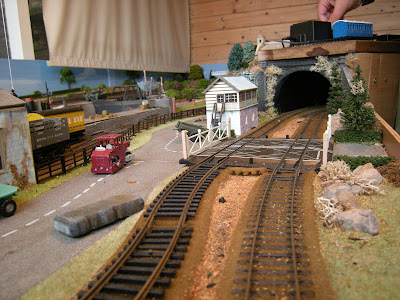 We popped to my old stamping ground of Littlehampton - Britain's toughest town - a couple of weeks ago, calling in on family. This is Jeff's place. As well as numerous artefacts of Sussex - Jeff is a rabid Sussex nationalist - there were Green Men, a nursery for trees that he rescues from the Downs as seeds, then brings on and replants back on the Downs, and an excellent model railway.

Posted by Steve Sainsbury at 11:50 pm No comments: 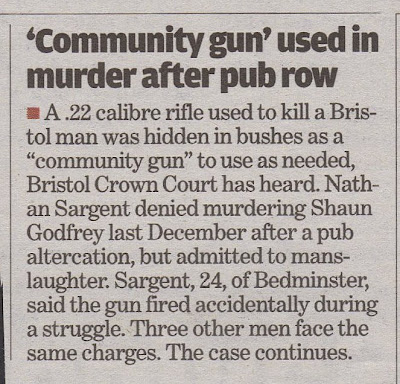 This gem appeared in today's Independent - other communities have playschemes, parks or coffee mornings. Here in Hartcliffe we have a community gun! I only wish I was party to where it's kept as there are a few climate change deniers and hippies I'd love to send on their way!

Posted by Steve Sainsbury at 12:04 am No comments: 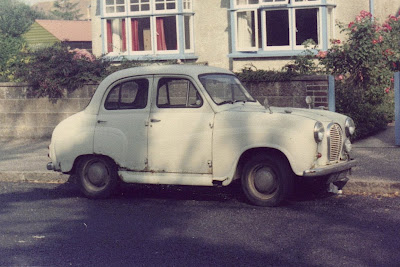 Oh dear! When things are chugging along calmly Panther churns out post after post, but when the shit hits the fan I'm much more likely to be watching the news, Bloomberg and the markets. And what a week or so it's been! First Lehman Brothers and Merrill Lynch, today it's Lloyds possible buy out of HBOS. The markets dither and don't always reflect the long term reality, but the drift is down.

So what's the long term view? My own faith in capitalism will never be shaken, but I'm glad that we're beginning to see the end of this Thatcherite socialist populist 'capitalism', that's really just consumerism for sheep fuelled by cheap credit and tat. I think this is the beginning of the end for so-called 'globalisation' and a robust rebirth of genuine, small-scale, artisanal capitalism, funded by wealth rather than debt. The death of the dollar (and many other fiat currencies) is getting closer by the day, the death of pointless jobs will follow and the growth of the family as unit of production is on the rise. Our towns and villages will begin to fill with shops, business units and real people, our railways will be reinstated and energy will be produced in the UK, not imported at high prices from stupid places like Russia and the Middle East.

This is a major, pre-Transition, change to our society, and not before time.

Posted by Steve Sainsbury at 11:44 am No comments: 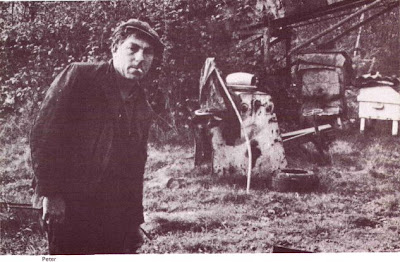 The Bank of England fucked up again today. They didn't raise interest rates.

To rebuild our shattered economy after 20-odd years of Credit Cruncher abuses aided by craven governments we need to rebuild our national balance sheet, and the best asset class is cash in a strong currency. We get that two ways - by building a strong industrial base that underpins a strong currency, and by encouraging our citizens to be thrifty and SAVE. We're not going to do that with interest rates so low. My money's going into gold, silver and land, REAL money.

These fuckers still haven't learned the lesson. We need economists running the country, not idiot politicians whose only interest is in keeping the sheep grazing.

Expect REAALY bad economic news over the next year or two, and to avoid it just read this blog!

Posted by Steve Sainsbury at 10:04 pm No comments: 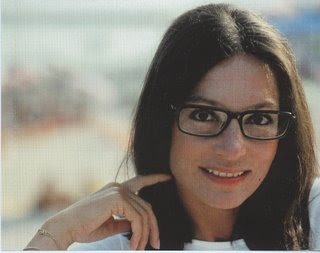 The poor Americans. Having to choose a replacement for dimbo tree hugger Bush. And what a choice they have! Smarmy smart-arse Obama, or zombie McCain. And as for his 'running mate', Sarah Palin, it's got to be a joke! She runs a village store up north, surrounded by a gaggle of kids with stupid names - she wouldn't be out of place in Hartcliffe! And now her 17 year old - called wonderfully 'Bristol' (How Hartcliffe is that??) - is up the duff by some chav loser.

I like my Republicans old school. Low IQ, loads of money and easily controlled.

So what does Sarah believe? Apart from that the Commie Centre is the best place on earth? She is convinced that 'global warming' is not man made. Impressive, as she'd be hard pressed to find a single scientist who would agree with her. But there again she believes in 'creationism'.

It's all crap anyway. Obama will walk this election, McCain will probably pass away before November in any case. And Sarah can go back oop north to sell fishing reels and bullets, whilst believing the world is flat. Fuck 'em all ...

Posted by Steve Sainsbury at 1:06 am No comments:

the future and the past 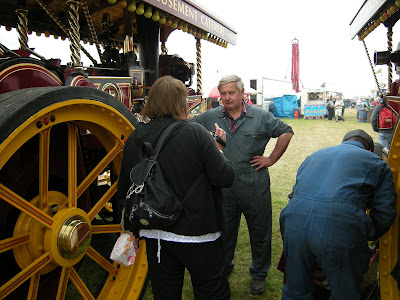 Scene from the Great Dorset Steam Fair, near Blandford. Debs is interviewing one of the owners. 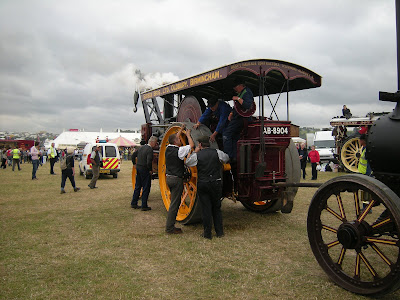 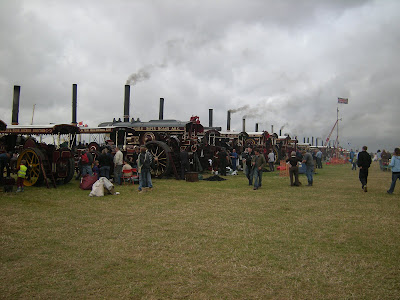 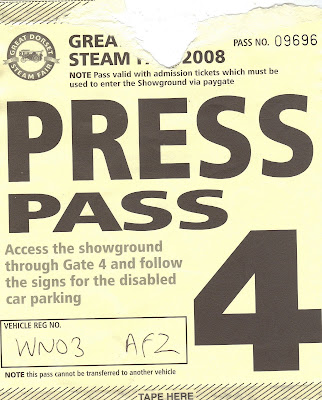 Our press pass - which gave us a carte blanche to wander the site and ask questions. This was at the invitation of ITV Local Meridian, who were experimenting with using bloggers to report on the show.

I suspect 99% of the visitors go for nostalgic reasons - but of course steam is likely to become very much part of our future. Bear in mind that the most advanced form of energy - nuclear - is really just a big steam engine. The nuclear reaction heats up water which turns to steam and works the turbines.

There are also HUGE reserves of coal in the UK, and the government is already eyeing this up. It's not hard to imagine the coalfields of South Wales, South Yorkshire, Scotland, the Midlands, the North East and even Somerset and Kent bursting back into life over the next 20-30 years. There is also a huge unworked coalfield under Oxfordshire. Of course coal is - currently - a dirty fuel, and any talk of using it sends the tree huggers into apoplexy (good!!) But clean coal technologies may well come along, even if expensive. But of course to be sustainable we need to grow and burn wood. Imagine the UK covered in vast forests, all sustainably harvested for fuel. With the vast increase in railways and rail traffic expected in the future many of these railways will, once again, be worked by steam, where electricity is too expensive or difficult an option. The future is beginning to resemble the past more and more.

Back to the fair! Visitor numbers are now in excess of 200,000. Almosst all arrive by car, by the fair organisers are looking ahead and considering building an on site railway. This will no doubt be steam powered!

The flexibility of the traction engines is amazing. As well as pulling heavy loads, they could also be used to work farm machinery and, of course, fairground rides. This flexibility is something we've also lost on the railways, as locomotives have been replaced in many cases by multiple units. A locomotive can pull freight or passengers, can shunt, work a snowplough or engineering trains. Flexibility is the key to keeping costs down. I bet the fair railway when it is built uses locomotives, and will be the better for it!

Posted by Steve Sainsbury at 6:49 pm No comments: