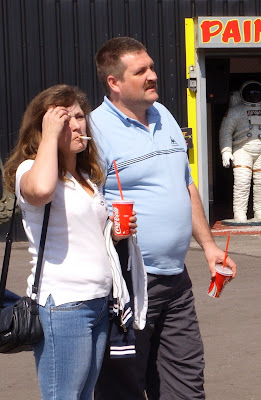 A pub in Cornwall, 'England', has decided that the best way to keep its disgusting clientele - 99% of whom are smokers - is to secede from the UK and join Peru. Well they're welcome to you! Perhaps they'll sponsor all your customers to have 'loser' tattooed across their faces? Haven't the idiot landlords realised that 99% of their customers are smokers because they only have one customer - and he smokes 'cos he thinks he's still living in Wigan, 1928. Wait until 1 July, the haze will clear, the coughing will stop, old Sid will pop his clogs (literally) and REAL people, not loser tossers, will start using their pub ...

Or perhaps they can just all fuck off to Peru where they'll be welcomed with open arms? The picture above is of the king and queen of Peru enjoying a 'fag'.
Posted by Steve Sainsbury at 11:07 pm No comments: 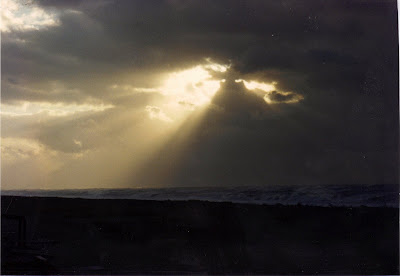 China has just wiped out all the gains made by the rest of the world in combating climate change by its unfettered 'development'. Although a signatory to the Kyoto Accord, China is exempt (so what's the point) as it's a 'developing' country. Surely controls on developing countries should, if anything, be even tighter than on the developed nations? Otherwise it'll all run away from us? China is not 100% uncool of course, and is even developing car-less cities, but you wonder if their heart's in the future or firmly stuck in the past?

I was convinced of the reality of climate change ten years before most, as a result of the 1987 'hurricane' in Sussex. I lived on the coast where it was worst, and I was persuaded then that something odd was happening. Now I'm trying to spread the word about Peak Oil (and Peak Coal), ten years before most have heard of it! Peak Oil is a bigger threat in the medium term, especially in the UK. Apart from the storms and flooding, the UK will probably benefit from climate change (in the medium term) with warmer winters, vineyards, hot seasides and palm trees everywhere. Unless the Gulf Stream fails of course ....

I'm ready for both, with a convertible and a Land Rover!

Posted by Steve Sainsbury at 7:41 pm No comments: 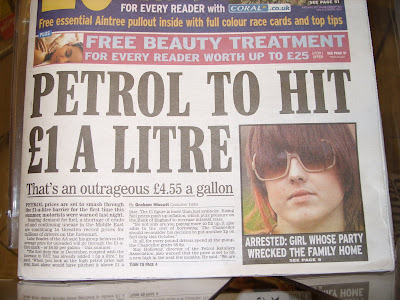 The comics are making a fuss over the non-story that petrol's likely to hit £1 a litre this summer. Er, so? The price still doesn't reflect either its scarcity or the damage caused to the environment by burning it. £5 a litre would be more realistic, and high enough perhaps to alter peoples' behaviour and begin to affect government transport policy.
Until then it is unbelievably cheap, and we should all make the most of it while we can, because in a few year's time £1 a litre will seem like we were almost being given it for nowt.
But then the Express gives itself away by trying to quote in gallons! Petrol hasn't been sold in gallons since the 1980s and we all earned far less back then, so any comparison is frankly facetious. It was like the tosser who complained about the price of tea at the catering coach this week - nine shillings! As decimal currency hasn't been around since 1971 we can only guess how much he earned back then, and how much a cup of tea was ...
Posted by Steve Sainsbury at 5:36 pm No comments: 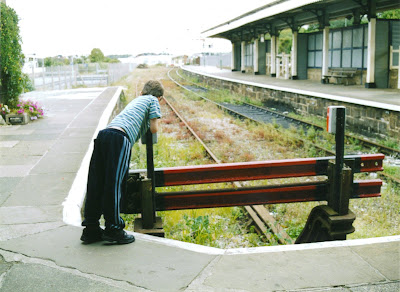 I love this shot. It's Wulfric at St Erth two summers ago. We were in the middle of a South West Rail Rover trip and were about to travel up the branch to St Ives, one of Britain's finest lines.

The idiot commie Beeching tried to destroy our future by destroying our railways but even he missed a few of the branches in the west country. Today you can still travel to St Ives, Newquay, Falmouth, Looe, Gunnislake, Exmouth and Barnstaple by modern transport, even if Padstow, Ilfracombe, Bude, Bideford and many other big towns in the SW are still waiting for their trains to come back. Not long to wait now ...
Posted by Steve Sainsbury at 3:54 pm No comments: 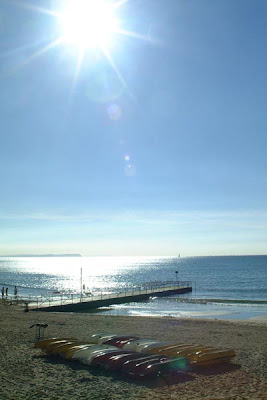 So the tabloids are forecasting 80 degrees by the end of this week. After a ridiculous frost and snow-free winter, a blistering summer and autumn last year, even the sceptics have melted in the sun, and we all now are aware of Global Heating.

I can't wait. A heat-hazed Britain drenched in sun, packed beaches and warm winters sounds great! And car-free and aeroplane-free to boot!
Posted by Steve Sainsbury at 7:48 pm No comments: